I’m worth more than a $100 trillion in Zimbabwean dollars! Now before you tell me that the currency isn’t worth the paper it’s written on, I want to mention that until yesterday, I had less money than a homeless person. On August 22, 2017, I received a paycheck that made me debt-free. My wife and I paid off$32,959.85 of student loans in 305 days. 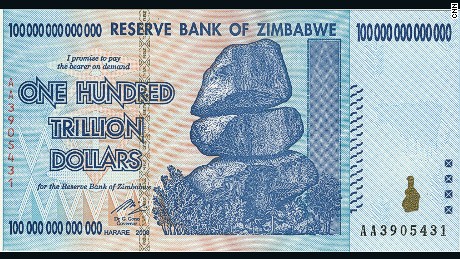 It’s actually a pretty weird feeling. Credit cards and student loans have normed me into this weird frame of mind where I don’t believe money in my bank account is actually mine. It’s weird to look at a bank statement, and rather than interpreting the bold number on the bottom of the page as “what I can use to survive,” it’s “what I can use to live with and give with.”

In this article, I’m going to share five tips that I would share with somebody who also wants to journey into a life of no payments. If you’re someone who likes the idea of owning every dollar in your pocket, check these out. I really resonate with Dave’s mission to help Americans get out of debt so they can be more generous to others, and better provide for their families. Dave Ramsey has helped millions of people out of debt (including me). Dave Ramsey sold more than 10 million books on how to manage your finances. 13 million people listen to Dave Ramsey every week. There may be other folks out there that know how to manage their money, but Dave Ramsey’s 25-year track record is hard to beat. Dave Ramsey’s free podcast was a huge part in my financial education in the last year. His podcast has helped my wife and I get on the same page with our finances, and has educated us to make wise financial decisions for the rest of our debt-free lives.

In addition to a bunch of practical how-tos, Dave Ramsey also features “debt-free screams” on his show. When one of his listeners pays off their last debt (which sometimes includes their home), they can come on his show and share with millions of listeners how and why they did it. After sharing their experience, they finish off by saying, “Three, two, one… I’M DEBT FREE!!” As a listener, I know that I’ve been motivated by hearing others in similar situations to me share how they cut back on expenses to pay off their loans.

2. Get on a Written Budget

I use YNAB (You Need a Budget) for budgeting. It’s free for students, and while Dave Ramsey has a budgeting tool of his own, my wife and I were already pretty savvy with YNAB, and we didn’t want to change that system while we were undergoing our metamorphosis. But regardless of the tool you use for budgeting, every good budget forces you to do three things.

When writing a budget, you begin to see how many categories of spending you have. Here’s one list of categories that I’ve used:

That’s a lot of categories. I’ve seen lists longer than this, and I’ve seen lists shorter than this. Say you took home $1000 from work and split it evenly into 16 categories. You would have $62.50 in each category. This means that the $100 shoes that seemed painless a moment ago suddenly mean you made a $37.50 mistake. For most students, the reality is that 30% of these categories are going to eat up at least 70% of that sum, leaving the other 70% of the categories to share the remaining 30%.

Budgets tell you that you’re broke.

Christmas doesn’t sneak up on you. If your calendar has anything on it, it has Christmas on it. You’re going to need to save up for travel, gifts, and perhaps food. If budget, you can split these costs over 12 months. If you don’t budget, you’ll find yourself paying all those costs at once–or even worse–trying to finance it.

Whether it’s a vacation, a new car, or a tuition bill, it’s easier to make big payments in small chunks. Credit cards will charge you interest to do that after the purchase. Budgets will let you do that for free before the purchase.

A Written Budget Forces You to Get Creative

Creativity is a wonderful thing. Credit cards kill it. I’ve gotten down to $10 in a grocery budget and discovered all these creative recipes to make cheap food taste expensive. My wife and I have found activities to do for date night that were more meaningful to us than giving Andrew Jackson and Alexander Hamilton to a restaurant.

Life is full of lots of adventures that cannot be found with credit cards. A written budget helps you discover them.

3. Tell Your Friends and Family

Paying off debt is always better with cheerleaders. Debt has a lot of down-sides, but it has one really great up-side. Lot’s of people become your cheerleaders and biggest fans when you make a commitment to get out of debt, and alter everything about your lifestyle to achieve that goal. You may disagree with your friends and family on a lot of things, but I haven’t met anybody that’s thought less of us for our decision to pay off our loans.

Additionally, when you tell your friends and family, you often inspire them to do likewise. You paying off your student debts has a cascading effect on those around you, because when you inspire someone to pay off their debts, they often pass that inspiration on to still more people. If you’ve ever wanted to change lives, you can start by telling others how you’re paying off your debt.

Find something in your house that you look at every day, and then put a big old sign on it–something that will remind you every day of your goal and why you want to do it.

For my wife and I, we unfolded an Amazon cardboard box into a 6-foot long strip of cardboard. Then, we took some masking tape and a sharpie and made a thermometer that we hung on the inside of our front door. I took some post-it notes and put our projected progress all the way up the thermometer. It was really motivating to see that we could pay off different segments of our 7 loans by certain dates. Some were gone by Christmas, some were gone by my wife’s birthday, and the biggest, hairiest, meanest one was projected to be done by August (we killed it 9 days early!) It was so rewarding to watch them die off one-by-one as we filled up our thermometer each month.

We also found it was a great conversation starter whenever we had friends over. When people entered our house, rather than asking about the weather, or whether we had a good day, they saw this giant thermometer with lots of smiley faces on it, and asked, “What is that?” This was always a perfect setup for a lot of great conversations about life goals and future plans.

There was a point when I had five credit cards from different banks. I felt pretty clever that I was able to get rewards in almost every category

Here’s the problem: I was playing games with other people’s money, and only getting a small payout from it.

The only time that it makes sense to use a credit card is when you’re going to make the purchase anyway. There are some expenses that are like that, but there are many that aren’t. Having a credit card makes it too easy to overspend on the optional stuff, and the amount that you overspend on the optional purchases is almost always more than you get from rewards. There’s plenty of evidence out there from a simple Google search to convince you that you spend more with a credit card than with a debit card. If you want to save money, do it the way you did it when you only had a few dollars when you were little–pay with cash.

For a while, I was stashing money into Bitcoin. I talked about this in a prior post. When it was $8 of free money/month, it made sense. The income was guaranteed, and it didn’t keep me up at night. Then Bitcoin ballooned. The money I had stashed in Bitcoin suddenly tripled. I started asking myself whether I should have put less money into student loans and invest in Bitcoin, to make the most of it’s volatility. I wondered when would be the best time to cash out, etc… I found that watching Bitcoin prices was taking up a lot of time.

The problem was that I had so little invested in Bitcoin that the amount of time I was spending watching the prices, and keeping up with the news, was worth more than any marginal gains I could have realized by timing it perfectly. Maybe if I had tens of thousands of dollars in investments would it make sense. But there’s no way that this amount of investing could be justified when we had a negative net worth. It would stress my wife and I out, would take up too much time, and make reconciling the finances at the end of the month more challenging than it had to be.

I no longer own any Bitcoin. I’m perfectly fine with that.

The only way to make money with money is to take risk. The only way to take risk is if there’s a chance you might lose it. So if you’re going to try to make money with somebody else’s money, you have to first tell yourself that it’s okay if you lose other people’s money. That’s why I stopped playing the rewards game with credit cards. That’s why I sold all my Bitcoin.

Did I make money in either of these adventures? Yes.

Would I do it again? No.

Would I have been out of debt on August 22 if I hadn’t have done either of these things? Probably not.

Would I have been okay waiting another week or two to make up the difference? Absolutely.

So in conclusion, here are 5 pieces of advice I would share with someone wanting to journey into being debt free:

Did I miss anything? What tips would you share with someone wanting to get out of debt? I’d love to hear your feedback!